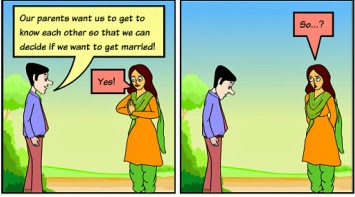 Pray and hope everyone is kicking well. Thank God its Fridayyyy!!
So I thought I introduce a new segment into this little blog of mine to spice things up just alil bit (lol!). As you might already read from the title, the segment is called ‘Hot Topic Friday’.

So Here We Go!

The modern world of engagement and marriage has turned into a joke as an elder in my hometown will say. There used to be a time when a man and a woman will date for years, court for years and even live together before embarking on the journey of marriage. Now, that isn’t the process anymore! People and couples are in a rush to tie the knot without doing what seems necessary (apparently or allegedly its the ladies who are desperate). This leads us to the question why? Ok yes I’m aware the Bible frowns against dating or fornication so-to-say (1 Corinthians 6:18), but who says one can’t date without sex? Yes we can! Its hard I know, but put your mind to it/pray. Easier said than done right? Lmao!


Just after six months of dating it looks like Big Sean has popped the question to his Glee girlfriend Naya Rivera. Lets not forget my girl Khloe Kardashian and Lemar Odom. And believe me when I say it isn’t just celebrities going down that road, non-celebrities (a.k.a you & I, lol!) are twerking to that tune too.

What do you think? Do you really know when you know? Where my marriage people at?

P:S. We’re celebrities in our own world!